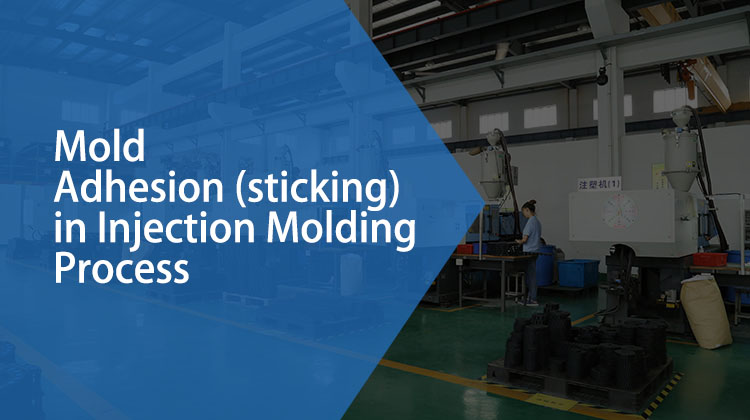 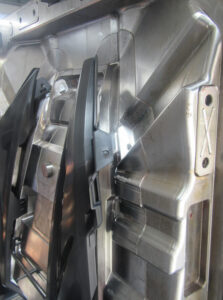 Mold adhesion, also known as sticking sprues or parts, is caused by improper contact of the nozzle tip with the sprue bushing, which does not allow sprue or part release and good filling. Usually, the diameter of the main runner needs to be big enough, so that the sprues are not completely solidified when injection molding

Material sticking in the mold can be a production killer, whether it is the sprue or the formed part of the cavity. The root causes of such sticking can be traced to one of several types of equipment or injection molding process issues.

Causes and Solutions for mold Adhesion

There are a lot of possible causes for sticking sprues or parts, but mold failure is one of the main causes, of which the reason and solution are stated as below:

1）Rough mold cavity surface. If surface defects, such as grooves, nicks, cuts and/or dents exist in the mold cavity/runner, the molded parts tend to stick in the mold, leading to release failure.

2）Mold Abrasion & Scrapes or Too Large Gap between inserts

If the mold refuses to open in the very early stage of injection, it means the mold is experiencing deformation under the effect of injection pressure due to insufficient rigidity. And, if the deformation exceeds the elastic limits of the mold, it will not be able to return to the original shape for further applications. Even if the deformation is kept within the elastic limits of the mold, the melt flow is cooled and solidified under the extreme conditions in the mold cavity. When the injection pressure is removed and the mold shape is restored, the molded part will be held in position by the resilience force, so the mold still will not open. As a result, when designing a mold, the rigidity and strength must be guaranteed.

When a mold cannot open due to a too great resilience force, increasing mold opening force alone is not a solution, but the mold should be disassembled immediately and then take the molded part out after heating and softening. For molds with insufficient rigidity, a frame may be attached on the outside to improve the rigidity.

When designing and manufacturing plastic injection molds, a sufficient mold release slope must be guaranteed, or it will not be easy to release the molded parts. If ejected by force, the parts will be warped, leaving cracks or white marks at the force application point. The moveable and fixed platens of the mold must be kept in parallel with each other, or cavity displacement will be caused, leading to poor mold release.

When determining the location of the sprue, we can add more auxiliary sprues to balance the feeding efficiency of a multi-cavity mold and at the same time reduce the pressure in the cavities. Usually, the small end of the primary runner should be 0.5 – 1mm larger than the nozzle diameter, and the concave sprue bushing should be 1- 2mm (radius) larger than the nozzle sphere.

6）Improper Design or Mis-operation of the Ejector Mechanism

Situations like indentation below the mold joint, and cavity edge line exceeding sprue line will all affect parts release to some extent. As a result, we need to pay attention to it and make a certain adjustment.

If the injection molding machine is too large in size, with a high-speed screw, great injection pressure and very long injection & pressure holding time, overfill will be caused, making molding shrinkage smaller than expected, thus leading to sticking sprues or parts. If the temperature of the barrel and the melt flow is too high and the injection pressure is too great, the hot melt flow will probably get into the gaps between mold inserts to cause flash, and subsequently sticking sprues or parts.

If the raw materials are mixed with impurities during the packing and transportation process, or raw materials of different grades are mixed during the pre-drying and pre-heating process, or foreign materials get into the barrel and/or hopper, sticking sprues or parts will also occur. In addition, uneven or too large material granules affect die adhesion, too. As a result, the materials for injection molding should be carefully screened and purified.

With regard to varieties of raw materials, it is harder to release a soft polymer part than releasing a hard polymer part. With regard to application methods, release agent pastes are brushed, and release agent sprays are applied using spraying devices. Due to the fact that it is not easy to form an even and regular agent layer when using the paste, so the released parts will have a wavy surface, the sprays should be used whenever applicable.

If the injection pressure is too high, the molding shrinkage will be smaller than expected, making it hard to release the molded part. At this time, we can facilitate release by reducing injection pressure, shortening injection time and lowering melt flow & mold temperatures. In such circumstances, the mold release agent that reduces the friction between the part and the mold will be the most effective. As for molds, the most effective methods would be improving the degree of polish, eliminating the bumps on the sidewall, grinding and increasing the number of ejector pins. When molding a deep part, it will be easier to release the part if you blow compressed air between the part and the mold (please refer to the overfilling in “crazing, cracks, fissures and white marks”).

There are 2 reasons for this – the nozzle is stuck to the cavity at some point, or the release resistance of cavity side is larger than that of the Core side, so the part sticks to the cavity. The circumstances in which the part sticks in the cavity due to the resistance between the nozzle and the cavity include: The nozzle radius R is greater than the corresponding corner radius R in the mold, so when fixing the mold, the nozzle and the mold are not concentric, or there are plastics leaking from between the nozzle and the mold. Either of the cases will cause the part to stick in cavity side. To prevent this from happening, the mold should be installed properly. The release resistance of cavity side is too high because the degree of polish is too low or there are bumps on the sidewall. At this time, a Z-shaped pulling rod should be installed at the core side, so as to pull the molded part. Therefore, during mold design, sufficient consideration should be made to keep this from happening. It works even though there is a temperature difference between cavity side and the core side.

（1） The mold is overfilled with plastics – reduce injection molding pressure; Lower the too high temperature of the ejection cylinder

（3） Mold surface scrapes, multi-holes or scratches – get rid of the stains and polish the mold surface

Cause and Solution for Main Runner Adhesion:

（1） Cooling time is too short, so the main runner is not solidified yet.